Senior researchers, early career researchers and PhD students, in academia, research institutes, and industry, in the UK and internationally

Please contact clementine.hadfield@oerc.ox.ac.uk for general queries about the conference, or events@eng.ox.ac.uk for registration related queries

Professor Yue Qi is the Joan Wernig Sorensen Professor of Engineering at Brown University. She received her B.S. degree in Materials Science and Computer Science from Tsinghua University and her Ph.D. degree in Materials Science from Caltech. She spent the next 12 years working at the General Motors R&D Center. At GM, she developed multi-scale models starting from the atomistic level to solve engineering problems related to lightweight alloys, fuel cells, and batteries. She transitioned from industry to academia in 2013 and served on the faculty in the Chemical Engineering and Materials Science Department at Michigan State University till 2020. Professor Qi and her “Materials Simulation for Clean Energy” Lab develop multi-scale simulations methods to design materials atom by atom. All of the materials she studied are critically important for an energy-efficient and sustainable future. She is passionate about increasing diversity in Engineering and was the inaugurate Associate Dean for Inclusion and Diversity in the College of Engineering at MSU between 2018-2020.

Daniel Steingart is the Stanley Thompson Associate Professor of Chemical Metallurgy and Chemical Engineering and the co-director of the Columbia Electrochemical Energy Center. His group studies the systematic behaviors of material deposition, conversion, and dissolution in electrochemical reactors with a focus on energy storage devices. His current research looks to exploit traditional failure mechanisms and interactions in batteries, turning unwanted behaviors into beneficial mechanisms. His efforts in this area over the last decade have been adopted by various industries and have led directly or indirectly to five electrochemical energy related startup companies, the latest being Feasible, an effort dedicated to exploiting the inherent acoustic responses of closed electrochemical systems. Steingart joined Columbia Engineering in 2019 from Princeton University where he was an associate professor in the department of mechanical and aerospace engineering and the Andlinger Center for Energy and the Environment. Earlier, he was an assistant professor in chemical engineering at the City College of the City University of New York. Even earlier he was an engineer at two energy related startups . He received his PhD from the University of California, Berkeley, in 2006. 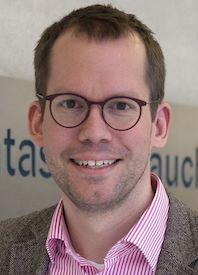 Dr. Birger Horstmann is leading the team “Theory of Electrochemical Systems” at the German Aerospace Center in the Helmholtz Institute Ulm. He studied Physics and Mathematics at the University of Jena and the University of Cambridge. After completing his PhD on theoretical quantum physics at the Max-Planck-Institute for Quantum Optics near Munich, Dr. Horstmann moved to the field of continuum modelling of batteries. His current research focusses on mesoscale models for electrochemical interfaces and interphases. This includes the theory of electrochemical double layers, nucleation and growth of reaction products, and the formation of interphases, e.g. SEI. Furthermore, he evaluates these mesoscale theories in macroscopic models of lithium and beyond lithium batteries.